Teyana Taylor On The Cover of VIBE VIXEN’s Digital Issue POSTED UNDER ARTIST : KATIE GOT BANDZ

Katie Got Bandz Releases New Mixtape: “Bandz And Hittaz” Check it out below via Livemixtapes.com! Last month, Crooks N Castles caught up with Iggy Azalea at the Sneaker Pimps convention and  they asked her to come check out the collection in house. She showed them mad love and wanted to rep them during the MTV Jams tour, so Crooks N Castles hooked it up! Honey Cocaine took on Kanye West’s “Clique” over the weekend.

The Hit-Boy-produced banger features the Cambodian rapper reppin’ her Canadian “416″ clique and ties to her Young Money mentor Tyga.

“All these jewels making b*tches think I sell gold/all my b*tches wearing Jordans and Chanel clothes/what’s that smell, b*tch it’s motherf*ckin flower bomb/this ya car, this ya plane, this ya shower song,” raps Honey Cocaine.

Making The Video: Behind The Scenes With Trina On The “Beam” Set Da Baddest Bitch Trina filmed the music video for her track “Beam” featuring Maybach Music Group affiliates Gunplay and Iceberg at Diamonds Of Atlanta strip club last week. Check out some of the photos below. Enjoy! 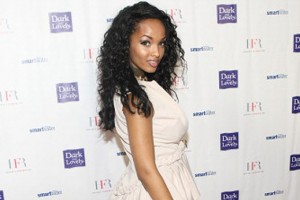 Lola Monroe took to twitter to announce her upcoming project. She revealed to her fans that the new mixtape title is “Lipstick & Pistols”. In other news Lola Monroe is set to release her own shoe, so stay tuned for more info on that. 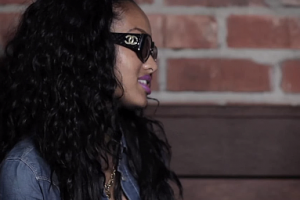 Karen Civil sits down with Taylor Gangs first female to talk about female mcs, taylor gang, major labels, being from DC, her upcoming mixtape and more!